„Ich bin ein Berliner“ – These Expats have tips for you!

New city, new feeling! Berlin is a place with a unique atmosphere: cosmopolitan, full of stories and history, with people who are sometimes blunt and direct, sometimes charming, but always distinctive. But moving to a new life also presents you with challenges. How do you really get settled in a new city when you don’t know anyone yet? These expats tell their stories and have some good advice for you.

Ashish is originally from Hyderabad, India. Early in his career he moved to the United States to study biology, then to Norway for his doctorate – and finally to Frankfurt. „For me, the U.S. wasn’t much of a challenge in terms of culture. But Europe is different, and it takes a while to understand how people tick here. Once you get settled in, though, it’s very rewarding!“

Ashish fetched up in Berlin two and a half years ago, where he found a job as a team leader at the German Federal Institute for Risk Assessment. 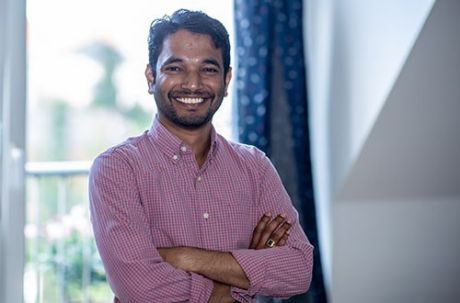 He loves the lively Berlin environment. Only an international metropolis, with people from all over the world and the most diverse economic backgrounds, can develop this special feeling in him.

„Exploring the city on my own during lockdown gave me a strong sense of belonging. I love the food culture, the street culture and the many green oases throughout the city. I really feel at home now.“ Ashish has just received his permanent residence permit.

Tips for the transition phase
I didn’t have a problem finding a bank. I looked on a comparison portal and found that Berliner Sparkasse was the best fit for me. I have a dedicated and very smart advisor who provided me with everything I needed and with whom I have a good connection.

Bureaucracy takes time, so be patient. When you finally get an appointment, make sure you prepare some time in advance and bring all the necessary documents with you. It’s always a good idea to bring a little too much. The best system is to combine different sources of information on the Internet to prepare accordingly. Or you can send an email to ask a specific detail of one of the officials.

If you have trouble understanding certain terms or phrases, you can use the DeepL translator, which works much better than Google. If you’re looking for a flat, try using your personal connections, and it’s good to make direct contact with the owner. Expand your search area – there are cosy places outside of Neukölln, Prenzlauer Berg and Kreuzberg!

Meet new people
Focus on the things you love to do and find like-minded people near you. For example, I joined a cooking club that is really fun, and I joined a jogging group. There are also various groups on Facebook, Reddit and Meetup on every topic imaginable and for every nationality.

Favourite places in Berlin
The Wall Trail extends 160 km around half the city. It gives an impressive sense of Berlin’s recent history as a city divided by political systems. It is also ideal for hiking and walking in and around Berlin.

Botanical Garden: a muted and quiet place to visit. Look out for themed exhibitions throughout the year.

Maria and Jorge have been living in Berlin for quite a while. Coming from Italy and Ecuador, for them moving to Berlin above all meant a move to a liberal, cosmopolitan city with an open mentality and great prospects for their careers. Maria and Jorge met through friends, fell in love and have been married for two years. With the help of their advisor at Berliner Sparkasse, they were able to buy their own apartment in the Waidmannslust district of northern Berlin. 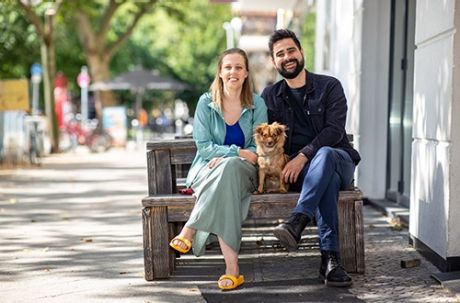 „For people who used to live in smaller villages, Berlin can be surprising and sometimes even shocking. It is the city’s very own charm and once you get to know it, you don’t want to be without it anymore. You can be who you want to be, and there are always free-spirited people around you. Berlin is the place we keep coming back to. We chose Berliner Sparkasse because it’s just a great bank and it has the most ATMs in the entire city. Our advisor is helping us plan our financial future for our little family. I trust him completely.“

Tips for the transition phase
Don’t be afraid of long, complicated technical terms about paperwork, contracts and so on. After a while you learn how the cookie crumbles, and sometimes it’s good to be persistent. If you have the opportunity, get help from a native speaker or someone who has experience with how the German authorities work.

Meet new people
There is an institution called Tandem where you can learn languages with native speakers from Germany and other nations.

Favourite places in Berlin
The Berlin Underground tour is great for getting a whole different perspective on the city. And Grunewald is great for long and quiet walks, with the dog or without. On Paul-Linke-Ufer you can relax and enjoy the unique and chilled Kreuzberg vibes in the afternoon or early evening.

Sophie is originally from London and moved to Berlin in 2012. She works as a freelance TV journalist in news and current affairs and is also the creator and host of an educational series called Sophie and Friends, a well-being show for preschoolers. She came to Berlin looking for an adventure and found a place that she now calls home. „The sense of being at home in Berlin is something that I feel on a daily basis, and particularly in the summer, when a lot of people are out in and around the city.“ 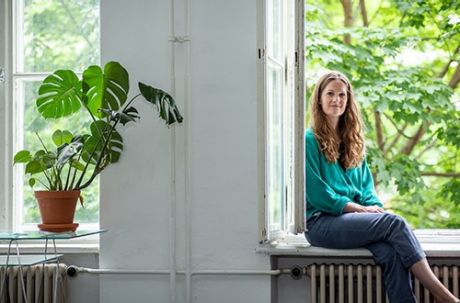 Some years ago, Sophie joined a project called Über den Tellerrand, an NGO that creates opportunities for people of different backgrounds to meet and connect through activities like cooking together or making music. It was originally founded in 2013 to help refugees integrate and is now active in 35 cities across Germany and beyond. „A fabulous way of giving back and creating new friendships.“

Tips for the transition phase
Finding a flat in Berlin can be quite a challenge, especially when you’re new in the city. My advice is to get all your documents together and look as much as you can in as many places as possible, spreading the word far and wide that you’re apartment-hunting. It can take a while, but keep at it, something will come up!

Speaking some basic German might help you with your apartment search too – as well as with some of the other bureaucratic tasks there are to do when moving to a new country. Having said that, there are an increasing number of tools (online and offline) that can help you if you don’t yet speak the language, and often kind new friends will be more than willing to support you too!

Meet new people
One thing that coincidentally really helped me was volunteering. Working with an organisation that helps other people for me really gave me a sense of belonging, purpose and community.

Favourite places in Berlin
Tempelhofer Feld has a great atmosphere and an urban beauty to it, all year round. You can go there to do sports, hang with friends or even ski if there’s enough snowfall in the winter! I also love getting out of the city and exploring some of the surrounding nature. There are some stunning lakes! One of my favourite spots to take a dip is Liepnitzsee, just north of Berlin. You can search any lake online ahead of time to check the water quality. Another favourite activity when the weather’s nice is soaking in some culture at one of the many open-air cinemas all over the city.

We will be happy to advise you

Living and working in the German capital.

Your first to-do in Berlin:

Buying a flat in Berlin

This is how to get your own home!